Robots in the operating room19

Surgeons use million-dollar robotic devices in operations that require more precision, an expanded range of motion, and greater control than using their hands. The robot assists with suturing, dissecting, and retracting tissue, but surgeons remain in control. Dr. Benjamin Tee, at the National University of Singapore, has long been captivated by a scene in Star Wars: The Empire Strikes Back in which a surgical droid replaces Luke Skywalker’s hand after Darth Vader slices it off with a lightsaber.

“A fully autonomous robot surgeon is the Holy Grail,” although still many years off, says Dr. Tee. But he and other researchers are developing devices that can perform surgical tasks with minimal human oversight. Dr. Tee’s latest project is an artificial skin that would give robots a sense of touch, allowing them to differentiate between healthy tissue and tumors and make surgical incisions. Other researchers are working on robotic surgical assistants that use machine learning and AI to avoid soft tissue, for less invasive surgeries. 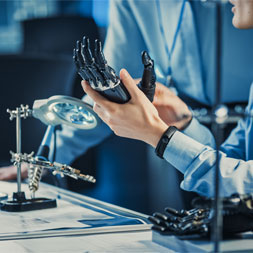 From science fiction to reality: The scene in Star Wars: The Empire Strikes Back in which a surgical droid replaces Luke Skywalker's hand with a prosthetic may not be so far off.

On the Cutting Edge: Part 5
Key Questions to Ask
About Your Robotics System

The business implications of the new intelligent systems world mean that the dynamics for decision-making in robotic systems are evolving rapidly. What we might once have seen as incremental steps now become opportunities for transformation.

Ask yourself these five key questions as a team with business, strategy, development, and operational members. Using a simple scale from 1 (somewhat irrelevant) to 5 (a significant opportunity), you can calibrate how fully you are maximizing your opportunities by thinking about these areas.

If you score between 1 and 2 for any question, think through the ideas in this article to consider whether your robotic systems are bypassing significant opportunities.

Contact Wind River to discuss your plans for your robotics system with an intelligent systems expert.

19 "Autonomous Robots Are Coming to the Operating Room," The Wall Street Journal, September 2020

Talk to an expert

By submitting this form you agree that your personal information will be used by Wind River to process this request and send you further information about Wind River products and services pursuant to our privacy notice located here: windriver.com/company/terms/privacy.

Thank you for your interest. A representative will contact you shortly